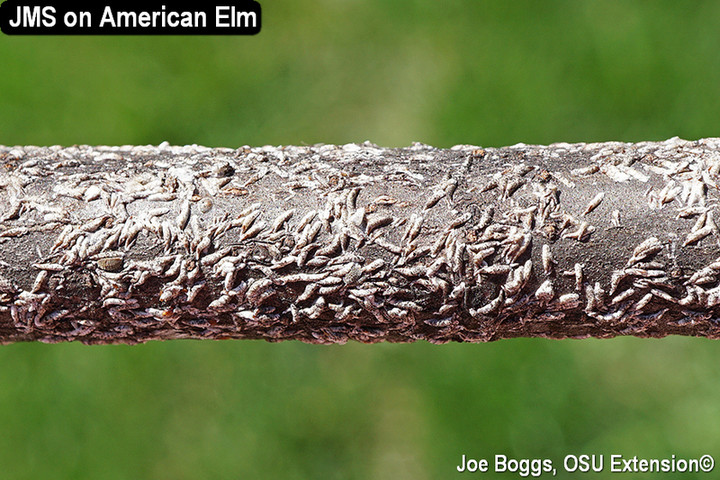 Scale management is difficult but an incorrect identification can make it impossible. This is sometimes the case with the exotic Japanese maple scale (JMS) (Lopholeucaspis japonica, family Diaspididae). It's relatively new to Ohio, its name is misleading, and it may be mistaken for other more familiar scales. 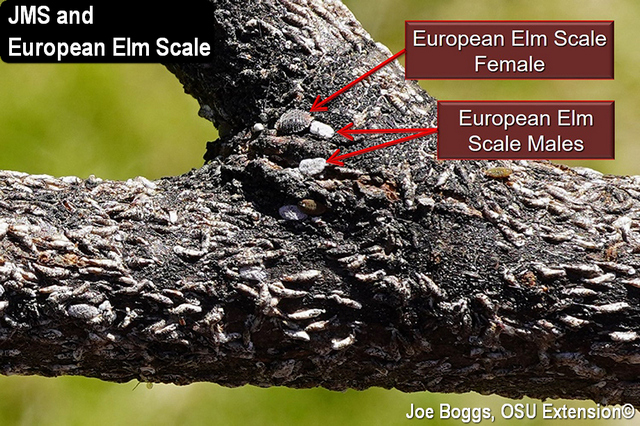 JMS is a so-called "armored scale." This group of scales is so-named because they spend much of their life cycle protected under a waxy armored cover, called a "test." The only mobile stages in the life cycle are the adult males, which look like tiny winged aphids, and the first instar nymphs that hatch from the eggs. These are called "crawlers" … because they crawl. 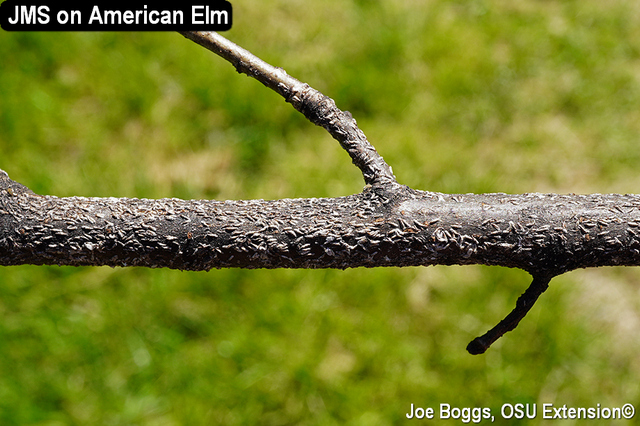 As with all armored scales, JMS nymphs and females feed by inserting their long piercing-sucking mouthparts into plant cells causing them to rupture and collapse. This is unlike soft scales, felt scales, and a number of other insects that insert their piercing-sucking mouthparts into phloem vessels to withdraw large quantities of sugary sap with the excess liquid excreted the form of honeydew which is a polite name for scale poo. Armored scales do not produce honeydew.

As you can see in the image below and many of my other images, the black sooty molds colonizing the honeydew from the European elm scale had an impact. On one hand, the accretion obscured some of the armored scale coverings. On the other hand, the charcoal black accentuated some of the white scale coverings. In fact, my attention was drawn to the trees by small white spots highlighted by a black background. 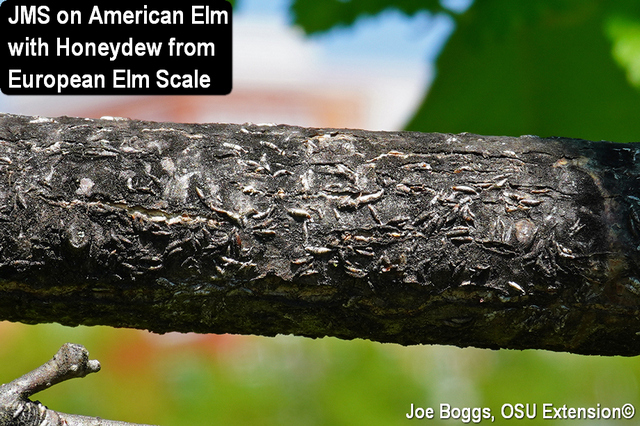 JMS tends to congregate on the undersides of stems. They also gather in bark fissures presumably to reduce the drilling depth required for their piercing-sucking mouthparts to reach delectable stem cells. 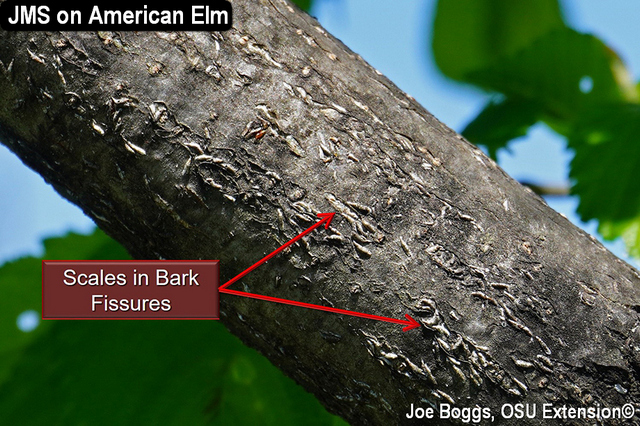 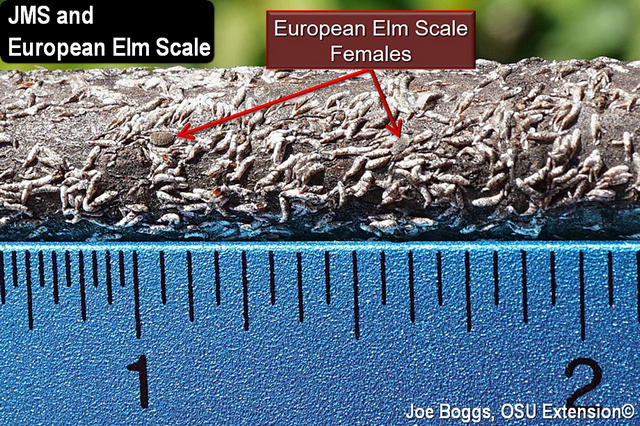 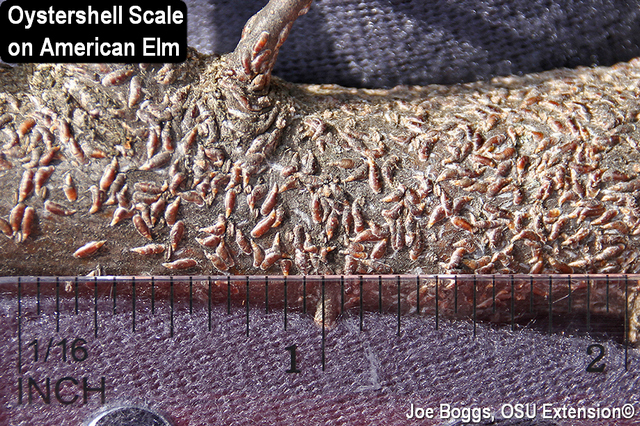 Although this scale was first discovered in the U.S. in 1914, most of the detections have occurred over the last decade. Some speculate that the discovery of this non-native scale may have been hampered by cases of mistaken identity. Regardless, it's still considered relatively new to Ohio. Currently, JMS has been detected in Washington DC as well as 16 states including AL, CT, DE, GA, IN, KY, LA, MD, ND, NY, OH, PA, RI, TN, and VA.

Separating oystershell scale and Japanese maple scale is easiest at this time of the year. Oystershell scales spend the winter as eggs under the tests of the females. The female tests look exactly like light brown to grayish brown oyster shells with one end pointed and the other broadly flattened. Carefully lifting them and taking a look under high magnification will reveal the pearly white eggs. 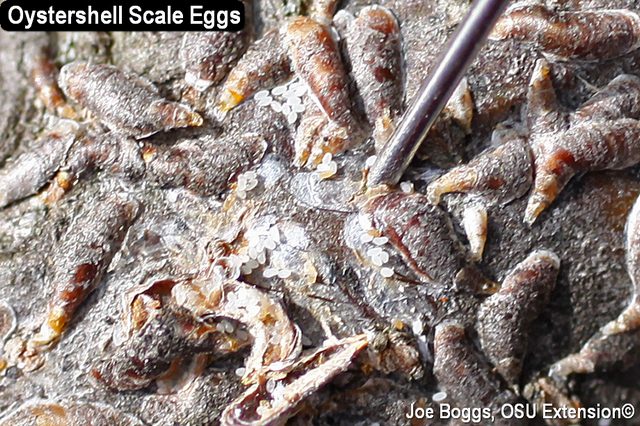 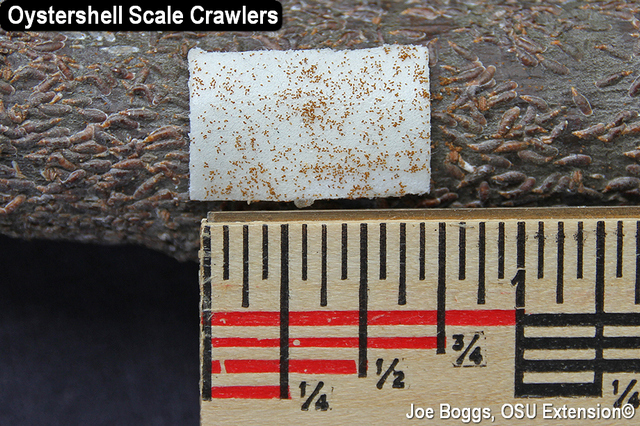 JMS overwinters as females covered in a reddish-brown test which in turn is covered by a brittle white covering. Carefully rubbing the white covering will reveal the test and lifting the test will expose the light purplish colored females. If you look closely at this time of the year in southwest Ohio, you may see the males mating with the females. They look like tiny winged aphids. 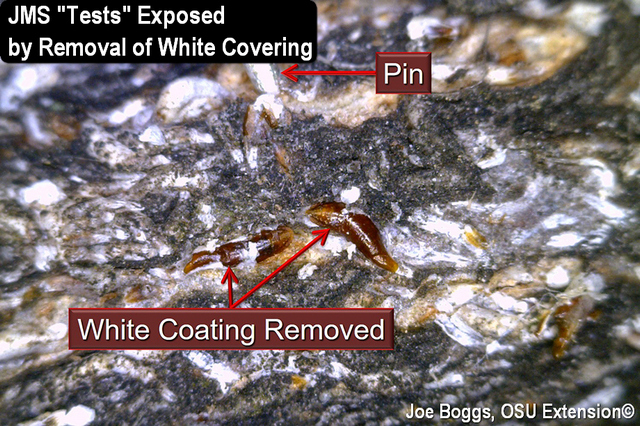 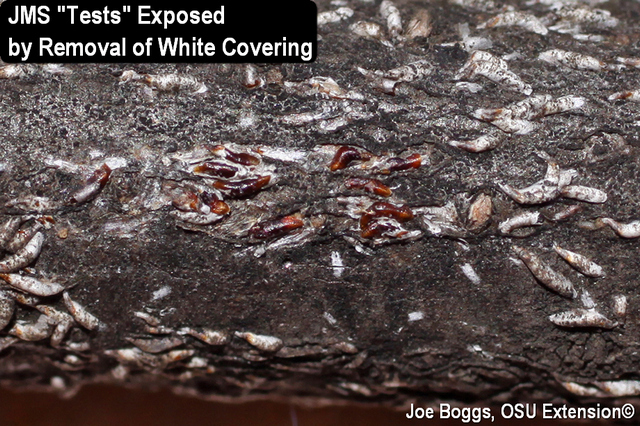 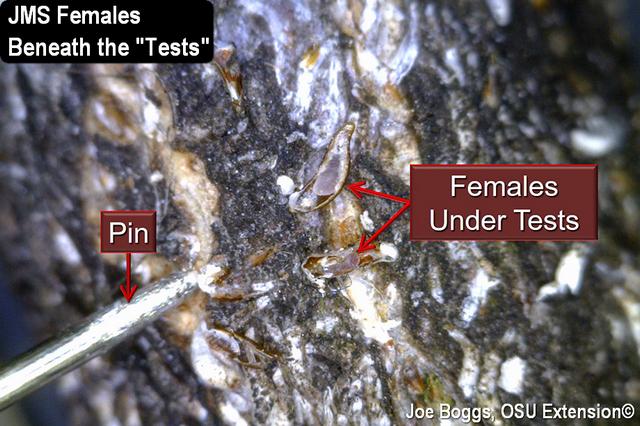 Much less is known about the seasonal life cycle of JMS compared to oystershell scale. Research has shown that the scale hastwo generations per seasonin Maryland and Virginia andone generationin Pennsylvania. However, based on my own observations, I believe it has two generations in southern Ohio. The exact number has not yet been established for the northern part of the state.

According to a University of Maryland Extension fact sheet, JMS eggs begin hatching at 816 GDD (base 50) and peak at 1,143 GDD. Full bloom of smokebush (Cotinus coggygrias) and Chinese lilac (Syringa chinensis) can be used as phenological indicators. The first instar nymphs crawl about for around 8 weeks. Second generation crawlers appear at 2,508 GDD with peak egg hatch at 3,022 GDD. Crawlers are active for around 7 weeks.

Note that because oystershell scale spends the winter as eggs while JMS overwinters as females, the oystershell crawlers emerge much earlier in the season compared to JMS. Also, oystershell scale only has one generation per season while JMS may have more than one generation, at least in southern Ohio. Although both of these armored scales are susceptible to many of the same insecticides, application timing is very different. Mistaking one for the other seriously effects management.

1. Inspection: this is particularly important for new plants. A low-level infestation on a few new plants can quickly explode into multiple high-density infestations across multiple plants. Make sure to part the foliage on plants with dense canopies so you can peer down onto the lower stems. Also, look at the undersides of the stems and examine bark fissures where JMS often congregates.

2. Don't Destroy Beneficials: scale insects have many natural enemies and JMS is no exception. The key is to apply tactics that kill the scale, not the beneficials. For example, if the JMS population is low and the scale is accessible, it can be physically removed through selective pruning or by scrubbing the stems.

First instar nymphs (crawlers) are highly susceptible to insecticides, but so are the beneficials. Don't use a topical insecticide such as a pyrethroid that kills beneficials. Research has shown that you'll eventually be dealing with higher scale populations on the rebound.

3. Choose Your Weapons Wisely: there are a number of effective insecticides that will kill the JMS crawlers and leave the beneficials alone. According to various university fact sheets, dormant and horticultural oils are effective and they preserve beneficials. However, the job may be incomplete if the JMS population is high. Tank mixing with an insect growth regulator (IGR) such as pyriproxyfen (e.g. Distance) or buprofezin (e.g. Talus) provides greater efficacy, although the IGRs alone also work well.

Of course, as with all pesticide applications, it's critical to read and follow label directions to maximize efficacy while minimizing off-target impacts. Also, you should never rely on a single tactic for suppressing JMS or any other armored scale. For example, an effective strategy may be to target the first generation JMS crawlers with a systemic neonicotinoid to account for the extended period of time that crawlers are present then follow-up with an IGR on the second generation crawlers.

4. Don't Walk Away: it's rare for any chemical suppressant to provide 100% efficacy. You should continue to closely monitor affected plants and be prepared to repeat the IPM steps listed above.